Ah yes, the old “Kundalini Awakening.”  But what is it…??  Although the term Kundalini is from Sanskrit and is associated with Indian mysticism, Tantra, and Yoga, the word refers to a living element in nature (so, within us, within our nature) and is thus known in all religions by different names.  In Judaism and Kabbalah, it is called Shekinah.  In Christianity, it is the fire of the Pentacost that illuminated the apostles and it is also where Moses acquired The Ten Commandments from God–that is, God gives to each one of us the commandments to purify ourselves and illumination to live better lives in the heights of our mind (mount Sinai) through Kundalini Awakening.  And in Buddhism it is known by many names, such as Candali.

So, Kundalini, the serpent power or mystic fire, is the primordial energy or Sakti that lies dormant or sleeping in the Muladhara Chakra, the centre of the body.  It is called the serpentine or annular power on account of serpentine form in the spine.  It is an electric fiery occult power, the great pristine force which underlies all organic and inorganic matter.  Kundalini then is the cosmic power in individual bodies; and it is not a material force like electricity, magnetism, centripetal or centrifugal force, but a SPIRITUAL POTENTIAL Sakti or cosmic power.  So, in reality it has no form.

The human being wakes all his senses–outer and inner ones–via the cleanse and reanimation of The Third Eye (which is located biologically in the center of the brain, at the height and between the eyes, which is also called the pineal gland).  When the pineal gland is illuminated all the IN-SIGHT and IN-TUITION is enhanced in the person and The Kingdom Of God is seen at the end of the ladder (at the end up the spine, in the awakened conscience of man) by the person who was before sleeping in The Third Dimensional state of existence (the plane of confusion and suffering/the fallen Adam and eve state) and now is awake in The Fourth Dimensional state of existence (the plane of wholeness and bliss/of Adam and Eve in The Paradise and walking with God). 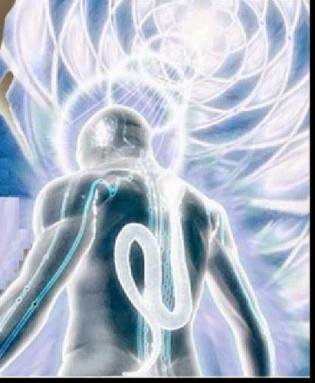 This means a full animation, or RE-animation, of all the senses–intelligence beyond intellect and intuitive wisdom–swallows the whole interaction of the person.  It is when man reaches illumination through the purity and cleanse of the mind, higher morality, and the union of intellect and heart. 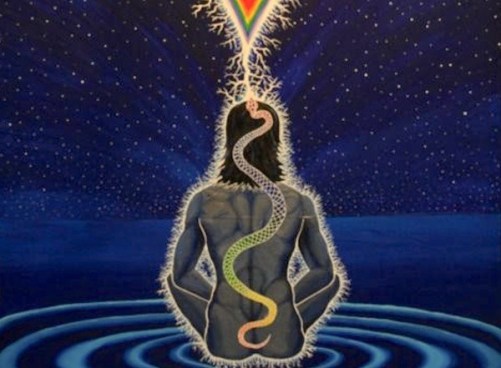 The symbolisms hidden in The Bible for the true seeker, for the mystical ones, are many:

Thomas’s Jesus, in the ‘Gospel of Thomas,’ is a dispenser of wisdom, not the crucified and resurrected Lord. Jesus speaks of the kingdom: “The kingdom is inside of you, and it is outside of you.  When you come to know yourselves, then you will become known, and you will realize that it is you who are the sons of the living father.  But if you will not know yourselves, you dwell in poverty and it is you who are that poverty.”

So, why did Jesus die at 33 then…??  What is the symbolism and the message hidden there…??  The Bible is a sacred book hiding messages for the true seeker.  So, why 33…??  The vertebral column consists of 33 vertebrae–this is named ‘Jacob’s Ladder’ in The Bible.  Symbolically, as Jacob climbs this ladder (our vertebral column) of 33 steps he is filled with divinity and names the top ‘Peniel ‘(Pineal Gland; Peniel: Penis-El – The Cubic Stone of Yesod in Kabbalah – The Sacred Philopher’s Stone of the Alchemist). Hanukkah (the Jewish holiday) symbolizes the ‘Oil of Christ,’ which is our own spinal fluid, which rises up through the spinal column as the Kundalini energy connects the 7 chakras and then reaches the Pineal Gland/Peniel/the spiritual Third Eye.

Now the sacred oil (spinal fluid) has reached ‘Golgotha’ or ‘The Place of The Skull,’ then it is ‘Crucified’ there (Crucified symbolizes a reach in intensity, an increment in power), and then the sacred oil remains two days and a half (the moon’s period in zodiac signs every month) in the tomb (in the cere- bellum) and on the third day ascends to the Pineal Gland which connects the cerebellum with the Optic Thalmus, the Central Eye in the ‘Throne of God’–that is, the chamber overtopped by the hollow (hallowed) caused by the curve of the cerebrum (the “Most High” of the body) which is the “Temple of the Living God.”  And then Enlightenment happens! Thus Christ goes up to Golgotha, gets crucified, and on the third day (Third Eye) achieves Enlightenment.

The number 33 hides a very esoteric meaning.  Some hidden meanings are:

Jesus was crucified at the age of 33 – In 33 A.D. Jesus also performed 33 written miracles – The divine name Elohim appears 33 times in the opening chapter of the Genesis creation story – The Vedic Religion has 33 deities (33 Gods/Devas.) – Number 33 is considered a Master Number in Numerology, which means that it resonates at a higher vibration than other numbers – in Mathematics 33 is the largest positive integer which cannot be expressed as a sum of different triangular numbers – 33 is the atomic number of arsenic (important chemical element) – There are 33 degrees in Scottish Rite Freemasonry – And many other hidden meanings… 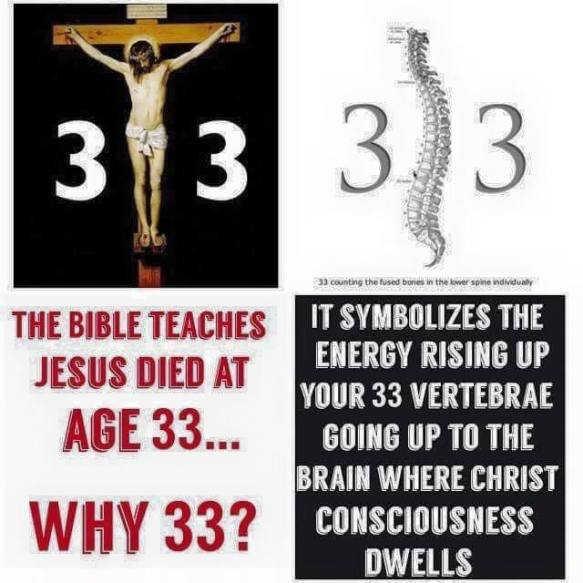 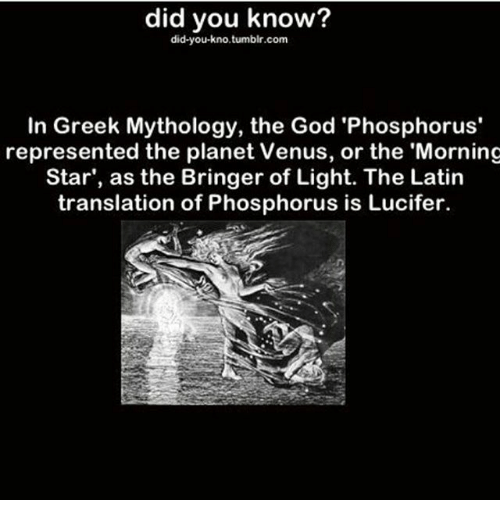 It is often said that we are beings of light.  Why…??  Shouldn’t we be beings of darkness.  I mean, we come from absolute darkness before time and space, and so darkness is the natural origin; no light can even exist without darkness.  In another post I’ve talked about Lucifer, how he is the fallen angel to rise back up as the illumination in us, rise back up to God.  It is phosphorus, a substance in the Earth’s core, in animals, plants, and in our human nervous system, which shines in and of itself.  In our system and foods:  Phosphorus is a mineral found in many foods and it is also one of the most common substances in our everyday environment and in our body.  It plays an important role in the health of our kidneys, bones, muscles, and blood vessels, as well as each cell in our body.

Phosphorus works with calcium to help build bones.  You need the right amount of both calcium and phosphorus for bone health.  Phosphorus also plays an important structural role in nucleic acids and cell membranes.  And it is involved in the body’s energy production.  In short, phosphorus is the chemical that brings light, literally, into us (in the photo below, it shines or glows green), it creates energy, stamina, support for growth, the strength for better functioning to rise up and reach God state again.  Insufficient phosphorus in our system, leads to bone loss, to many nervous system conditions, fatigue, loss of energy, and many more forms of self-destruction. 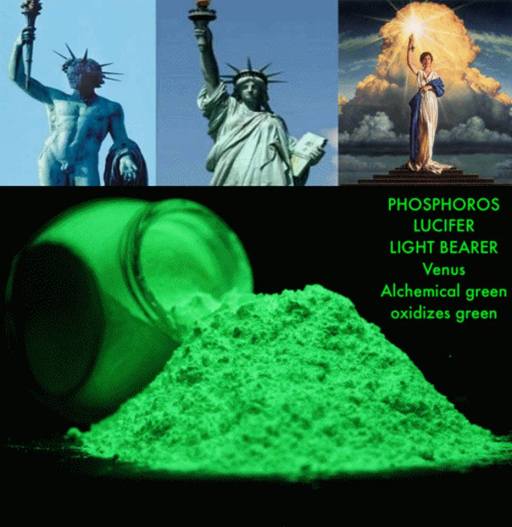 In the Bible: “In 2 Peter 1:19, where the Greek text has exactly the same term:  ‘phos-phoros’ ‘light-bearer.’  This is also the term used for Jesus in Revelation 22:16.”  ‘Phos-phoros’ is phosphorus.  As a chemical, phosphorus is essential for life, and the phosphate is a component of DNA, RNA, ATP; and also the phospholipids that form all cell membranes.  When we awaken kundalini, which we know is our central nervous system, we let the chemical energy known as phosphorus, the light within us (‘Lucifer’- ‘the light bearer’- ‘the light bringer’), to be properly distributed throughout the central nervous system as it ascends up the spine to our brain.   The very element of chemical energy that is crucial in mastering ourselves, because it is our inner Lucifer

Ancient traditions worldwide, and also ancient drawings on Egyptian walls, state that during the Lemurian epoch certain sacred individuals came to the Earth in a cosmic astro-ship.  These individuals were forming a very high sacred Commission which was entrusted with studying the evolving and devolving problems of the Earth and its humanity.  The Archangel Sakaki and the Principal Archphysicist and Universal-Common-Chemist Angel Looisos were the two main individuals from this holy divine Commission.  Long story short, a big percentage of humanity back then grew covered by a physical tail, similar to the tail of certain reptiles, as per their low vibration and lasciviousness (their chosen lifestyles).  Hence, the dwellers of the Earth carried on their lives with such appendages or projection of their spinal column (downwards projection reaching the “dimensional infernos” or lowest being/the abomination in man).

In later periods during the history of the centuries, when other sacred individuals considered that there was no longer need for the abominable Kundabuffer Organ to continue to exist, they eliminated it from the human body.  (Now, humanity as a whole is an organ from Nature.  This organ collects and assimilates cosmic energies which are necessary for the development of this planetary organism.  Disgracefully, to be a machine is not very pleasant, yet it is what the so-called “human being” is:  We are machines, plain and simple.)  Unfortunately then, the awful consequences of having had that Kundabuffer Organ remained in the “five cylinders” of the human machine–which are intellect, emotion, movement, animal instinct, and sexual energies.  These, uncontrolled, unguarded, without sacred knowledge, become demons or psychic entities/the “I” which bring suffering and personify our errors constituting the unbalanced ego/the infernos in man.

It is necessary to know that the Kundabuffer Organ is the negative development of the fire (the sacred spiritual kundalini force).  This is the descending serpent, which precipitates itself from the coccyx downwards, towards the atomic infernos of the human being (the uncontrolled and rebellious “body of desires” of the intellectual animal, the human being).

And it does not matter if one believes the story mentioned as true or not; what matters is to recognize the symbolism here…  Once you realize symbolisms on anything you read, see, and experience in general, your inner vision open/your third eye begins to see by intuition… 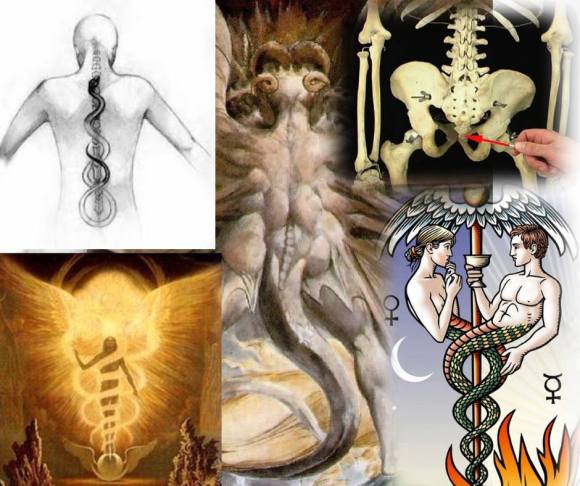