Skip to the content
The human mind has been born from the highest state of consciousness, the cosmic origins of life itself; but due to the cultivation of knowledge, traditions, and the myriad of fears society has designed throughout thousands of years, this same mind has been polluted, degraded, and lowered–its very state in consciousness, unbeknownst to most of us, has become the state of the lowest thought-forms.
Meditation is the access and circulation of purer energy so with daily practice this same debased mind can again come back to the state of higher consciousness, such estate which we call Enlightenment and even beyond, ‘Samadhi’–the wondrous state of absolutely no-mind, where you dwell in the bliss of nothingness for longer periods of time/ascension. 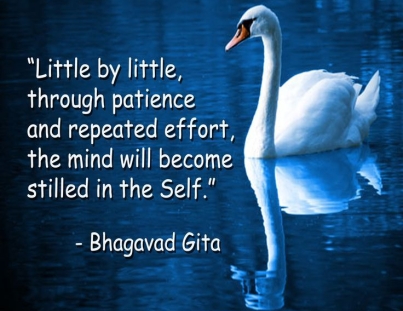 I had read the sacred Bhagavad Gita–Hindu scriptures in verse part of the Mahabharata epic–a long time ago, which started me into serious meditation, and I had not come back to it until recently.  Here are some beautiful and, to me, inspiring words I chose for you to read…

Lord Krishna, to his disciple Arjuna, said:  “Let the yogi seated in solitude and alone, having mind and senses under control, and free from desires and attachments for possessions, try constantly to contemplate on the Supreme Self:  The yogi should sit upon a firm seat that is neither too high nor too low, covered with sacred Kusha grass, deerskin, and a cloth, one over the other, in a clean spot.

Sitting and concentrating the mind upon a single object, controlling the thoughts and the activities of the senses, let the yogi practice meditation for self-purification.  Hold the waist, spine, chest, neck, and head erect, motionless and steady, fix the eyes and the mind steadily between the eyebrows, and do not look around.  With serene and fearless mind; practicing celibacy; having the mind under control; let the yogi sit and watch emptiness, focus on the Self.
Thus, by always keeping the mind fixed on the Self, the yogi whose mind is subdued attains peace of the Supreme nirvana by uniting with Me, with Divinity…  This yoga is not possible, O Arjuna, for the one who eats too much, or who does not eat at all; or who sleeps too much, or who keeps awake. But, for the one who is moderate in eating, recreation, working, sleeping, and waking, this yoga destroys sorrow.”