The human being is ruled by his psyche, thus his thoughts in time become his greatest influences, his past and future slave-drivers; and so, this causes his ego to be as powerful as he ignorantly desires, for he lives overwhelmed by these entities called thoughts, which are always trying to escape reality by imagining, expecting, desiring, reliving past miseries or joys.  But it is indeed this past and future seeking which causes all illusion in man, is it not…??

Expectation, for example, is an image formed in the mind, a mere construct of a future as seen through the eyes of the thought-illusion/thought-form.  An expectation then is a strong desire projected into a future, and all projections are not realities (whether possible or not); consequently, this is attachment to this particular projected image, which in most cases brings a false sense of security and joy, or anxiety and misery, for as long as the projected image is given power and full attention.

To be free is an absolute state of present awareness where you entertain your behaviors in the Now, and where the mind is filled with love for what is happening around you instead of being filled with anxiety and the various forms of fear, pleasure and pain, which the past and the future hold.

It is extremely important to restrain ourselves from mentally roaming and living in an expectation, thus transforming ourselves into the awareness of this moment and so love and appreciate what is happening around us, whether positive or negative, seeing it as a blessing and a lesson.

“Whatever it is you’re seeking won’t come in the form you’re expecting.”  ~ Haruki Murakami; Japanese writer. 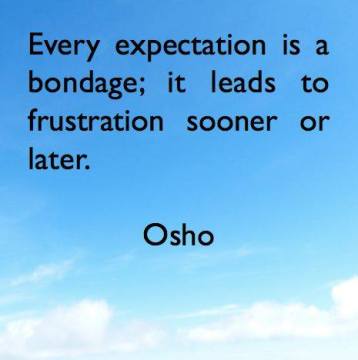