Skip to the content
“I learned that courage was not the absence of fear, but the triumph over it.  The brave man is not he who does not feel afraid, but he who conquers that fear.”  ~ Nelson Mandela; former President of South Africa, anti-apartheid revolutionary, politician, and philanthropist.
When I was living in Texas and my father died my whole world crumbled to pieces, I was truly devastated, because I had spent serious amounts of time with him and we had been really close.  He died suddenly from pancreatitis (inflammation of the pancreas) after a few days in the hospital; he never knew his condition, we did not know either, but it grew within him like cancer.  After he died, I became depressed and lonely, I cried for days and did not feel the energy to do anything; this man which was noble and a perfect role model for me had now left me alone with my immaturity, fears, and in a country which was immensely different from Argentina.
After a while of sobbing and feeling sorry for myself, light shone upon me from somewhere within me and I knew what I had to do right then and there; I knew then that I had to choose between wallowing in my own pathetic tears of self-pity, or face the world like the lion faces the jungle without fear and with a mighty heart of conquest.  And it took me time after various trials after that, after working and jumping from job to job, and after dealing with my loss and fighting life beside my family, but I finally understood that which is already in our hearts but whispers and is really difficult to hear with all the pitiful cries and garbage spewed by the monkey mind and the fears it brings to us.  Yes, I understood that I had this unstoppable energy, this drive flooding each cell in my body and flowing down the river of my bloodstream, and all this strength of mind which said to keep going, relentlessly, powerfully, faithfully against the mediocrity and bullshit of the world around me. 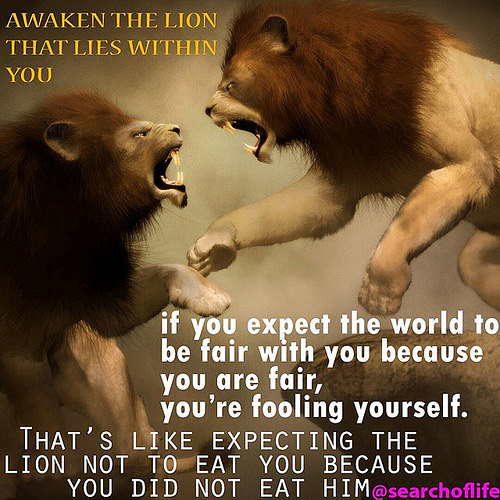 See, in God’s nature the lion roars and everybody becomes silent and still.  In God’s nature, the lion walks and everybody gets out of its way.  In God’s nature, the lion roars and the weaker animals cower in its very presence.  In God’s nature, the lion emanates respect and authority, and the others know it, they feel it.
In the weak and artificial nature man has created, there is no lion, only sheep; however, the illusion is that being like the rest of the sheep is the popular thing, therefore the normal, strong, and natural thing, as in the godly thing.  Love is all!  Love all around!  Yay!–  Angels and bullshit from Heaven.  Religions, of course, do not preach otherwise; they say the same, just read the Bible, pray, follow others, be kind, of good heart, and that’s it.  And yet, people still die from depression wallowing in loss and fear, people still underfoot and living in poverty, people still cry and live in the past over and over and over again never believing in this energy inside them.
God’s nature is the lion and not the sheep.  Through my own experience I have learned that we are here on this earth to thrive and get ahead, to fulfill our great destinies which we create with heartfelt decisions, to be more than just mediocre machines working to pay the bills and getting married and procreating.  Love and being kind in your journey is something to live every single day, something noble as the noble predators, godly and powerful creatures we are; however, that WILL NOT get you to great success, to fulfill your higher purpose (the reason why you have a body and a mind).  Leadership means being strong and not just kind and loving, thus leadership will create you into the real lion living in God’s nature–i.e. the true nature inside your cellular make-up, flowing and being bright within you, ready to make a transfiguration of the weaker you into the stronger, driven you.  Unstoppable and powerful, that is what you are; but, obviously, like I did, you need to choose a higher mind and to work hard at being stronger every day, committed.
Stop expecting your life to be made better only by your faith and by your good heart; having faith and heart is good and noble, but you need to take care of yourself, use and manage your energies from within you to become a lion and be driven, truly unstoppable in a world full of mediocre sheep whose higher purpose is to pay their bills, get married and procreate–i.e work for food, shelter, and mating, just like the lower animals in nature. 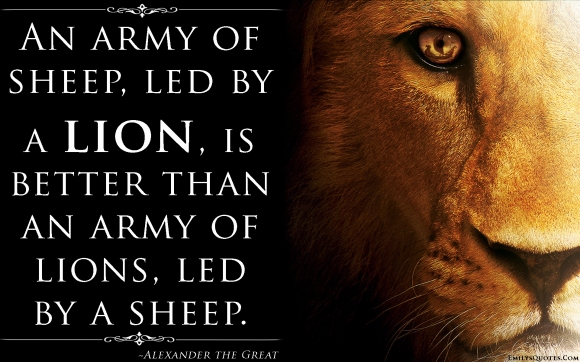